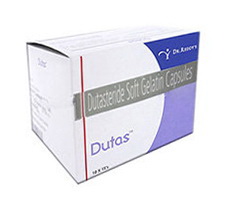 Dutas (dutasteride) is considered to be the most effective drug on the market today that is used in the treatment of male baldness (androgenetic alopecia). However, the primary purpose of the drug is the treatment of benign prostatic hyperplasia.

Dutas is produced in the form of capsules, which are soluble in the stomach and contain the active ingredient dutasteride in an amount of 0.5 mg.

Dutasteride was developed and patented for the first time in the United States in 2001 as part of a drug under the trade name Avodart. 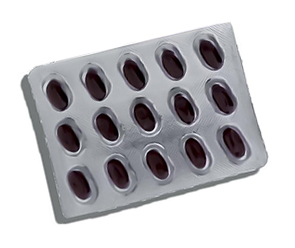 Dutasteride inhibits the activity of 5-alpha-reductase enzymes of the first and second types affecting the hormone testosterone and preventing it from turning into dihydrotestosterone.

Subsequently, the prostate gland, not getting the supernormal hormone dihydrotestosterone, stops the uncontrolled proliferation of its tissues and the process of hyperplasia stops.

Dutasteride is indicated in the treatment and prevention of progression of benign prostatic hyperplasia.

Capsules are taken orally, one per day, with water. According to the instructions for use, the drug can be taken regardless of food intake. However, Dutas is more effective when taken on an empty stomach, as such provides an increase of the concentration in blood by 10% to 15%.
Studies show that 0.1 mg of dutasteride reduces the level of dihydropteroate in a manner similar to that caused by 5.0 mg of finasteride, which is approximately 70%.

Contraindications for Dutas include individual intolerance to the active substance.
Dutas is known to be absorbed well through the skin, so the contents should not be extracted from the capsules; furthermore, it should be barred specifically from contact with the mucous membranes and skin of children and women at any time during pregnancy. Dutas can cause anomalies of the genital organs in boys during the intrauterine development phase.

Side effects of Dutas include a significant reduction in sexual desire, erectile dysfunction, a violation of control of ejaculation function, gynecomastia, and an individual intolerance of components in the form of allergic manifestations.
When taking combined therapy with medications that contain adrenaline blockers in their structure, cardiac control is necessary, since the risk of side effects increases.